Amidst reports that a few Muslims still insist on conducting congregational prayers, particularly the weekly Friday Jumu‘ah prayer despite the ravaging Corona Virus in all parts of the globe, an Islamic human rights group has warned Muslims to eschew extreme positions in matters of religion.

This was stated in a press statement issued by the Muslim Rights Concern (MURIC) on Monday, 23rdMarch, 2019. The statement was signed by the director of the group, Professor Ishaq Akintola.

“We are nonplussed by the lethargy manifested by some Muslims towards the danger posed by Covid-19. In spite of government’s efforts at sensitizing the general public on the need to shun gatherings, many Muslims are still calling our office asking us to speak against the ban on public gatherings so that they could observe Jumu‘ah service.

“Let us make our position clear on this. MURIC will not support any Muslim group or individual found contravening the ban on public assembly because the ban is in the best interest of citizens. It is not targeted at any religious group.

“Saudi Arabia cancelled all Jumu‘ah prayers. It also suspended ‘Umrah. For the first time in history, nobody is performing tawaaf at the Haram. In Kuwait, adhan (call to prayer) has been changed from ‘Come for prayer’ (haya ala al-salat) to ‘Pray in your houses (soluu fii buyuutikunm). But here in Nigeria we still find a handful of Muslims who insist on conducting Jumu’ah service. Do we want to be more Muslim than Muhammad (peace be upon him)?

“MURIC warns against extremist propensities. We all can see where Boko Haram has taken us. It started from little excesses like this. Islam is a religion of moderation. It is dangerous phenomena like Corona Virus that the Glorious Qur’an warned us against when it said ‘Do not make your hands contribute to your own destruction, but do good for Allah loves those who do good (Wa laa tulquu biaydiikunm ila al-tahlukah, Qur’an 2:195)

“Prophet Muhammad said, ‘We (Muslims) are a nation of middle-roaders’. He also said on another occasion, ‘The curse of Allah is upon extremists’. He taught us to be wary of harm, i.e. we should not endanger our lives unnecessarily : This he did by saying, ‘Where there is a tangible harm, it ought to be removed.’

“We therefore warn fellow Muslims against tramadolised religiousity and articulated spirituality. The former manifests when Muslims insist on observing Jumu’ah in this corona-infested atmosphere while the latter is exhibited when they insist on conductingasalatu sessions in this dangerous period.

“MURIC salutes the umbrella Islamic organisation in Nigeria, the Nigerian Supreme Council for Islamic Affairs (NSCIA) for enlightening Muslims in the country on the need for obeying government’s instructions on Covid-19. NSCIA’s statement on the epidemic was scholarly, comprehensive and insightful. We also commend the efforts of other Islamic organisations which issued public statements announcing the stoppage of all gatherings of their followers for either prayers, meetings or social events like naming, marriage and funeral ceremonies until the Corona Virus crisis is over.

“We urge other groups to follow suit. All Islamic organisations should emulate the NSCIA by obeying government’s directives. The Glorious Qur’an directed Muslims to obey those in position of authority (Qur’an 4:59). Based on this, MURIC will not entertain any complaints brought by recalcitrant elements. We base our actions on rationality and credibility. We have no apologies for those whose requests were rejected by us when they sought our backing to conduct Jumu’ah prayer at a time that the whole world is battling Covid-19. We urge them to go back to the true teachings of Islam on such matters.

“Furthermore, we call the attention of such cynics to the gravity of the situation. Germany yesterday banned any gathering that is more than two people(https://www.nytimes.com/2020/03/22/world/europe/germany-coronavirus-budget.html). Italy is under total lockdown as thenumber of fatalities rose to 4,825 by yesterday. Lagos initially limited the number of people allowed in any gathering to 50 but this was later reduced to 20 and it is all in our interest as the number of infections in Nigeria rose to 27 yesterday.

“We Muslims must face reality. The manner of congregational salat inside the mosque has all the likelihoods of infection. We stand shoulder to shoulder and feet to feet. There must be no gap between a worshipper and the man standing next to him. On the contrary, health experts recommend at least one meter between persons in social interaction in order to prevent infection.

“MURIC urges all Muslims to see government’s instructions on Covid-19 as necessary and beneficial to them. It is therefore in their best interest to cooperate. Zuhr prayers should be offered at home in place of Jumu’ah. The same may be done with the five congregational prayers where the number of those in the mosque is more than 20. However, we strongly advise praying daily salat at home with members of the family as domestic jama’ah.

“We call on Muslims to supplicate individually for Nigeria to overcome this humongous health challenge within a short time. Individual Muslims are also urged to seek forgiveness from Allah for the interruptions in our pattern of worship. We remind Nigerian Muslims that Islam teaches moderation, not extremism. We therefore advise against gymnastic exhibition of piety. There is no point trying to be more Muslim than Muhammad (SAW). 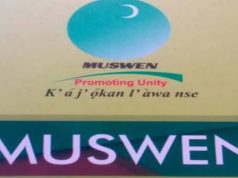 For The Record: Communique Issued After MUSWEN Webinar ON “COVID-19”