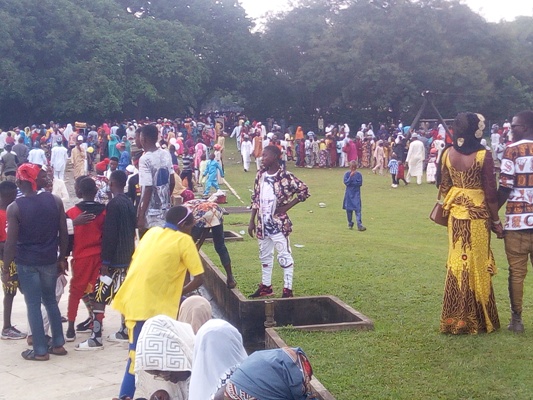 Hundreds of fun seekers on Monday took over recreational parks in the Federal Capital Territory (FCT) to celebrate the Eid-el-Kabir.

A correspondent who visited the park Millenium Park, Magic Land  reports that people of all ages were seen in clusters playing games, while others were  entertaining themselves with music, foods and drinks.
Staple food vendors at the Millenium  Park witnessed  high patronage as fun-seekers were seen thronging their wares.
Mrs Fatima Usman, a mother of four, who came with her children to the park said: “Although the times are hard, I decided to come with my children to catch fun because they are on holidays.
“From my past experience, I can say that  Millenium Park has  a huge number of visitors this year than the previous two years.
“ This is an indication that everyone, whether young or old wants to catch fun to ease away the economic and other pressures will are facing in this country.
Miss Mathar  Adejoh, one of the  sellers of Ice –Cream and soft drinks at the entrance  of the park,expressed delight that  she had a  high rate of turnover, an indication many  fun-seekers visited the park.
“The snacks and drinks I brought got finished so fast that I had to sent someone to bring more for me.
“I am surprised at the high number  of visitors to Millenium park today ,because it has not happened like this in recent times,” she said.
Also, Mr Adamu Idris, who came to  Magic Land with his family, said that the light rains  could not have stopped people from coming out to have fun at the park.
According to him, despite the early showers in the FCT, fun-seekers were still trooping in, adding that those who were already inside had to take cover under the trees and shields
“This Sallah is once in a year, that is why  people are determined to enjoy themselves outside their homes.
“I want to say that we Nigerians are a happy people; nothing can hinder us from making ourselves happy,” he said.
Mr Ibrahim Amadi, a Christain,said he was at the park to felicitate with his Muslim brothers in the spirit of love and oneness.
He said :“ In my family, we have both Muslims and Christians ,and we celebrate both Christmas and Eid together.
“Whether Muslims or Christians, we are one and   I thank God for this day, because it is an opportunity for me to come out with my family to have fun,” Amadi  said.
Though the popular Millennium park was wet, fun-seekers kept coming in while people who were hiring out mats made brisk business.