Recently, I read a quote on a friend’s WhatsApp status which says:

“Virginity is a marriage present to your husband and not a birthday gift to your boyfriend. Do not enter your matrimonial home PERFORATED!”

Last weekend, a couple of brothers and I were invited to reconcile a newlywed couple who had disagreement over virginity issue and were almost putting an end to a week old marriage. We were 5 in number: two medical experts, one professional counselor, and two scholars. At first, the parents tried to contain the crisis from escalating because, according to the groom’s father, it’s a shameful development capable of brewing eternal enmity between the two families. However, since the couple would not stop getting at each other’s throat, a decision was reached that professionals and scholars be invited to mediate and reconcile them.

Now, what was the genesis of the crisis?

Husband: When I met my wife, I observed that she possesses all the qualities that I want in a woman to a satisfactory level. However, there was one quality missing which cannot be observed except through bodily contact (he meant sex). So I asked her directly: “Are you a virgin?” She replied: “Wait until we are married to confirm it yourself.” This bothered me a lot, as I find her response tricky and insincere. So I was persistent in asking, while she remained defiant. Last week, we did our nikāh and I got to know that she was not a virgin! In fact, her not being a virgin did not pain me as much as the anticipation and anxiousness over a non-existent thing.

Wife: It is true that he asked me before our marriage whether or not I was a virgin and I told him to wait until the wedding night to discover it by himself. This is because to the best of my knowledge I was a virgin until he slept with me.

Husband: (interjects) beeni. No wonder the bedsheet was soaked in blood.

Me: Please, She did not interject you whilst you spoke. Let’s maintain decorum.

Wife: (continues) No man has ever touched me, let alone have carnal knowledge of me since I attained puberty. (Sobs). Now, he accuses me of Zinā indirectly just because he didn’t see traces of blood on our first night.

Me: All right. Now that we have identified the genesis of the crisis, tackling it shouldn’t be a problem. In our midst are medical experts who will give us the medical perspectives on this issue and my fellow Ustādh and I will address it from the Islamic angle before the counselor rounds it up. Doctors, over to you.

Doctor X: (Defined virginity and what constitutes it. Then, went ahead to explain how virginity can be lost aside having sex. He mentioned child abuse and molestation which he said could happen to the victim whilst she was too young to recollect. He also mentioned that exercises or over-stretching of the limbs could lead to its loss, among other things. He stated that some girls are born with very little hymenal tissue. Finally, he established that non-emission of blood during first sex is not a proof of lack of virginity. He went online and showed the husband several articles on virginity and why some ladies may not bleed on their first night.)

Doctor Y: (He corroborated completely everything said by Doctor X. He asked the groom a few questions and from his responses, he said that he was certain that his wife was a full time virgin.)

Ustādh X: (He admonished the husband to fear Allāh and stop throwing baseless accusations at his wife. He quotes Qur’ān 24:4 and 24:23 to establish the evil consequences of accusing chaste women wrongly both in this world and in the hereafter.

“And those who accuse honourable women but bring not four witnesses, scourge them (with) eighty stripes and never (afterward) accept their testimony – They indeed are evil-doers.”

“Lo! as for those who traduce virtuous, believing women (who are) careless, cursed are they in the world and the Hereafter. Theirs will be an awful doom.”

He made references to the submissions by the medical doctors and advised him to seek his wife’s forgiveness for the emotional trauma that he has caused her.)

Ustādh Y (being me) First, I told him point blank that he was merely being petty and childish on the whole issue. I asked him if his wife ever sought to know if he himself was a virgin before their wedding night.

Me: So why were you so particular and emphatic on her virginity when she never cared if you were one? Or is being a virgin exclusive for the women alone? This mad emphasis on women’s virginity while neglecting men’s chastity is what has emboldened men to continue to perpetrate illicit sexual affairs. Now, you’re claiming that she’s not a virgin because you didn’t see blood, isn’t she entitled to also know if you were a virgin, too? What’s the meter to gauge that?

Secondly, assuming that she lost her virginity in the past to illicit sex, she’s not under any obligation to tell neither you nor anyone about it. This is the position of the Sharī’ah. It’s a past sin that she probably has repented from, and it’s harām for her to disclose it. The Prophet (ﷺ) said:

“Every one of my followers will be forgiven except those who expose (openly) their wrongdoings. An example of this is that of a man who commits a sin at night which Allāh has covered for him, and in the morning, he would say (to people): “I committed such and such sin last night,’ while Allah had kept it a secret. During the night Allah has covered it up but in the morning he tears up the cover provided by Allah Himself.” Agreed upon

Thirdly, the medical experts have established with incontrovertible proofs that lack of bleeding is not a proof of absence of virginity. That, for me is enough evidence for every pious and discerning mind to agree that you’re on a wild goose chase.

Fourthly, what exactly is the correlation between virginity and being a good, pious, chaste and dutiful housewife? How does virginity translate into marital bliss and prosperity? That you yourself was chaste before your marriage to her doesn’t make you a responsible husband or mean that your marriage will last. Why the fuss?

(Wife seeks to be excused and comes back in a few minutes later holding the Qur’ān and water dripping from her body. Apparently, she had gone to perform ablution. She kneels down and swears by Allāh that no man ever had anything close to, let alone sex with her prior to her wedding night. Immediately, husband, sober and remorseful went in his kneels and held her close to himself, muttering “I’m sorry, I’m sorry. Please, forgive me.”)

Me: Counselor, I think your work is done. He has realized his mistake and apologized to her. We can only wish them the best.

Parents: (Appreciated our coming and prayed for us). 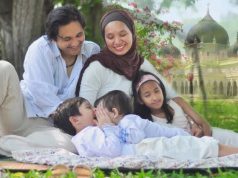 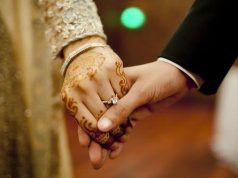 ON RELATIONSHIP WITH YOUR ‘EX’: CRACKS IN THE WALL