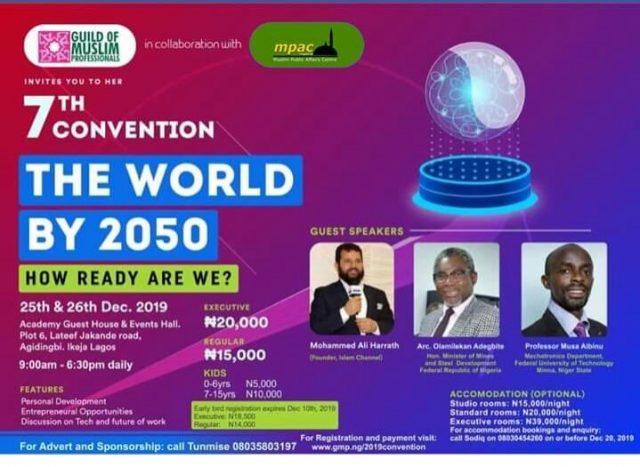 Concerned about the dehumanising dynamic that are shaping global polity and economy, two muslim non-govern mental organizations, the Guild of Muslim Professionals, GMP and the Muslim Public Affairs Centre, MPAC Nigeria are combining strength and resources to hold a ground breaking national convention.

The theme of the convention which holds in Lagos between December 25 and 26 is The World by 2050: How Ready Are We

Already the two groups have constituted strong central working committee made Muslim professionals that cut across all fields to deliver successfully on the convention.

They are expected to deploy their expertise in delivering an international standard convention that the Nigerian Muslim Ummah will be proud of.

According to the GMP President, Abdulhakeem Oyewale his guild which has hosted six annual conventions in the past considered that Muslims should be on the same page in setting public and global agenda and considered the Muslim Public Affairs Centre as sharing similar philosophy.

The Executive Chairman of MPAC, Disu Kamor is very enthusiastic about the partnership as he noted that his organization as a Muslim public service agency is open to all Muslim groups once they are serving the best interest of Islam and Muslims anywhere.

He cited MPAC partnership with the Forum for Islamic Education and Welfare and The Companion, a group of Muslims in Business and the Professions in the past to respectively and successfully host Arts Exhibition and organise national discourse.

A special in this historic joint Convention is the featuring of the Executive Director of the UK based based Islam Channel, Muhammed Ali, a Muslim cable channel that’s popular in Nigeria.

An a list of speakers, guests and anchors has been shopped for and selected to address a wide range of issues that touch on the quality of Muslim engagement and participation in public and global affairs.