A message on army recruitments into the Nigeria Defence Academy (NDA), Kaduna, in 2013 has recently gone viral on social media. The figures listed particularly for states with Muslim majority populations reveal shocking lopsidedness in the recruitments. Focus is being zeroed on an advertisement of list of successful candidates in the 65th Regular intake (course 65) recruited into the NDA which was allegedly published in the Daily Trust Newspaper of Friday August 23, 2013.


The Muslim Rights Concern (MURIC) considers these figures as lopsided, discriminatory and provocative. The exercise appears to have been heavily tainted with religious bias calculated to edge out Nigerian Muslims from military formations in the country. It gives undue military advantage to Christians thereby endangering the lives and properties of Muslims nationwide. We frown upon recruitment exercises which fail to recognize the diversity of the Nigerian people.


NDA is an elitist military institution whose graduates control the military. It will be dangerous for us as a nation if such an institution consistently produces a core of officers whose religious belief tilts towards any particular religion.


We are constrained to ask if there is a plot to build purely anti-Muslim security agencies in Nigeria. What is happening around the world elicits such a question. The police and army watched unconcerned as Muslims were killed while their houses were burned in Myammar and in Central African Republic. Is the Nigerian Army being prepared for such a pogrom? Are Nigerian Muslims safe?


In Nigeria, the extrajudicial killing of members of Boko Haram and the use of extreme force transformed the hitherto nonviolent group into the terror machine we have today. We also have the example of military heavy-handedness in the massacre of members of the Islamic Movement of Nigeria (otherwise known as Shiites) about a year ago.


We may however want to look at a larger picture. We are looking beyond the army. Could there have been a correlation between the attacks on Muslim groups and the predominance of non-Muslims in the army, the police and other security agencies? There seems to be a thick anti-Muslim sentiment among members of the Nigerian security agencies thereby turning Muslims into endangered species even in their own countries. We fear that this sentiment is being fuelled daily by lopsided recruitments into the army, the police and other security agencies. This trend, if found to be true, constitutes serious threat to national security.


MURIC therefore calls for an investigation into recruitments into the security agencies at least in the last five years. We appeal to the relevant committees in the National Assembly to quickly rise to this important aspect of its oversight responsibility. Democracies cannot afford to be protected by religious or ethnic bigots. Only a balanced and well structured security system can guaranty peace and security.


In addition, we urge the security agencies, particularly the Nigerian Army, to urgently embark on a general review of promotion exercises and retirement cases in the last five years. Both serving and retired officers and men who believe they have been unjustly denied promotion or unduly retired should be encouraged to submit memoranda.


In conclusion, we concede that ideally, recruitment into the security agencies and promotion from one level to another should be strictly on merit. Neither ethnicity nor faith should be barometers. Yet no geopolitical zone, tribe or religion should be completely marginalized to the extent of creating fears of possible extinction. This is the spirit behind Section 14(4) of the 1999 Constitution of the Federal Republic of Nigeria. 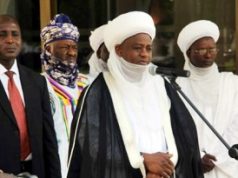