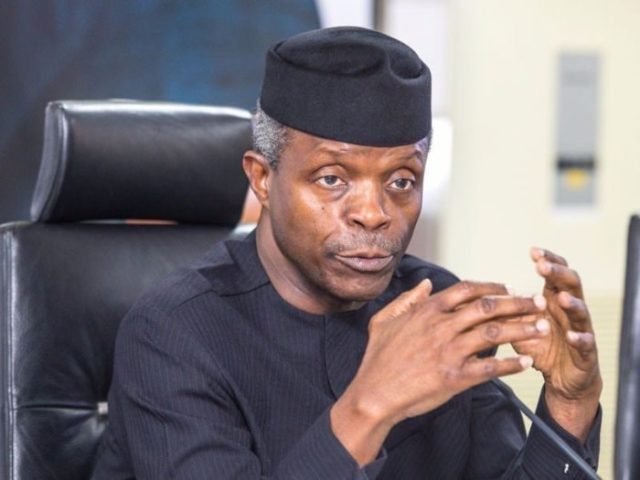 Vice President Yemi Osinbajo has commended Christian and Muslim youths in Nigeria for building bridges across faiths and promoting national unity and oneness.
Osinbajo gave the commendation while declaring open a 2-day National Muslim and Christian Youth Summit on Thursday in Abuja.
The summit is organised by the Community and Youth Development (CYD) and Christian Youth for Peace and Development Initiative.
The theme of the summit is “Toward Peaceful and Harmonious Nigeria: The Role of Christian and Muslim Youths.’’
“I am pleased to see that you, the members of CYD and the Christian Youth for Peace and Development Initiative have committed yourselves through the years to this most noble cause.
“Some describe young men and women as the leaders of tomorrow, but permit me to differ because the future is already here, and you are the leaders of today.
“That leadership role extends to being champions of peace, unity and understanding among different tribes and faiths today, and the future belongs to you.
“The greatness of that future will depend on the sacrifices you are prepared to make for the unity and peace of our nation.
“Thankfully you have started well; your associations have continued to build bridges,  fight discrimination and encourage love and unity.
“With the full knowledge that the great conflict of our time is not between Islam and Christianity but between extremism and human solidarity, between the forces of hate and intolerance and those of empathy and peace,’’ he said.
The vice president recalled that on May 30, he was privileged to receive in audience Imam Abubakar Abdullahi, the 83 year old Muslim cleric who saved the lives of 262 Christians.
He said that on June 20, 2018 Christians in their village, Nghar Yelwa in Plateau State were attacked and Abdullahi put his life on the line to save them.
The vice president said that Abdullahi’s action was exemplary and comparable to the Good Samaritan in Jesus’ parable in the Bible to illustrate who a good neighbour was.
He urged the youths to continue to live up to the tenets of their faiths and to the best values of human kind.
Prof. I-shaq Oloyode, Secretary-General, NSCIA, who was the first keynote speaker, said it was better Nigerians devised ways of building bridges instead of erecting fences as both Christianity and Islam would continue to exist.
Oloyode, who is the Registrar of the Joint Admissions and Matriculations Board (JAMB), said it was the fundamental role of Christians and Muslim youths to understand their religions and practice what they preached.
The second keynote speaker, Rev. Ibrahim Wushishi, Secretary-General, Christian Council of Nigeria, said that Christian and Muslim youths were indispensable agents in the quest to achieve peace in Nigeria.
Wushishi described youths as beacons of hope.
The Royal Fathers of the day were the Sultan of Sokoto, Muhammad Abubakar and the National President, Christian  Association of Nigeria(CAN), Rev. Samson Ayokunle.