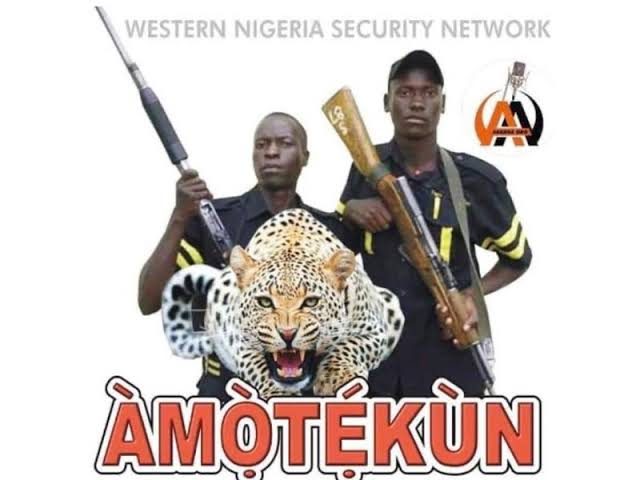 Religious connotation on AMOTEKUN or what some other people believes it’s a means to fetch ATEMOKUN, which simply means stomach infrastructure by some agitators, may not have arisen, if not for the premeditated and blithe attitude of the founders of the group, over the importance of religious impacts on many Yoruba faithfuls in South west is not tagged as a disagreement, rather a rebranded call.

No doubt, the fundamental structure of the name ‘AMOTEKUN’ is an extraction from the bible with different interpretations of the name of the animal in question to be either a leopard or a Cheetah and tiger. Though some Yoruba intellectuals, one of whom is a senior colleague and a senior Radio presenter on 105.9 FM, Ibadan, Adebayo Faleke, had dedicated his time to unravel the real name representing the animal in question with the view to balance the representation and what its stands for on the subject matter.

Again, I may not see anything wrong in picking a name from the Bible to name a security outfit, when such description actually refers to security of the people. According to the findings of Adebayo Faleke, he quoted the most accepted authority on Yoruba translation according to the Christian faithful, in person of Late Samuel Ajayi Crowder, who was the first to translate Bible into Yoruba, pointing at his acceptable language he used in translating the bible verse, Jeremiah 5-6 on the animal in question.

Not forgetting the fact that the term AMOTEKUN was coined from bible. And if all these are biblically generated, without the knowledge and consent of other leading religious organization from Yoruba speaking tribes and the order tribe dwellers interest in the states concern. Otherwise, it could be said to be a deliberate attempt of a particular religion to dominate and impose such a wonderful idea that is meant to be accepted by the entire people in this part of the country. In that case, it may be difficult to fly.

By the way, my primary concern here is about the name, the ideology, recruitment process and above all, the alleged statement credited to a pan Yoruba group called Afenifere to have been the champion of AMOTEKUN. It is obvious that that many Yoruba indigene would never which to follow them in anything particularly, as regards their security, because they would not forget in hurry their contributions in the last general election and the names given to some Yoruba’s that voted their consent as against the alleged dictates of Afenifere group. In fact if we can investigate the formation of the leadership of the group, it would shock one that they are thirteen people, nine of whom are from one particular state,precisely, Ondo State. All of them being virtually Christian faithfuls.

I stand to be corrected, I challenge the Afenifere, or the people in charge of the leadership of AMOTEKUN to make it public the decision that made up of Yoruba representation where they all agreed to accept the security outfits and to bear the name AMOTEKUN, or the decision on the recruitment process as it stands, if the entire process were really carried out in the interest of the entire Yoruba ethnic group. You can never find it. It is just a decision of some of these people I am painting here. You can never see a consultative measure in their decisions; decisions are always besed on the opinions of a few. How can such people get the cooperation of an entire people whose interest is not taken into cognizant?

Moreover, other things I understand based on the kangaroo arrangement is that, if you look at the title holder of Aare Onakakanfo, in person of Chief Gani Adams, you may want to conclude that it’s an avenue to create an office for him to become more relevant. Amotekun leather is part of what is used to decorates the Aare Onakakanfo, this should also have a correlation with formation of Amotekun. Just after the final death of OPC and what they are known for, even among the Yoruba race.

My other concerns also include the objectivity of operational formation of AMOTEKUN, I want a clarification on what exactly is AMOTEKUN security outfit is out to fight against and for? Because, mostly, all the planed purposes are allegedly focusing on alleged FULANI HERDMEN killings, and any interferences from the north. Should this be? Or are we igniting hatred for a sister tribe? This among others, are my concerns over the subject matter.

Some individuals are similarly calling for a change of the name of the security outfit and proper identification of the owners and their intentions. Some of such organizations being Muslim Rights Concerns (MURIC), MUSWEN, and the Supreme Council for Islamic Sharia, Osun State chapter and many others. This is also their right and they must be concerned about it. If Afenifere is claiming the leadership of Yoruba in Nigeria, they must also recognized the legitimacy of other groups who are constitutional leaders of some groups in the same region. The Muslims have every right to be involved on the matters that have to do with securing their lives and properties, particularly in the region that their largest in population.

This however, should not be termed to mean the Muslims are against the formulation of a security outfit that it supposedly designed to improve the security status of the region. But the point of the Muslims is that the ideal is coming from Christianity, it’s a welcome idea but getting a recruitment form and letter from only the church and their leaderships. It is dead on arrival until it gives room to a collective trust of all parties.

We must as a matter of importance understand that the Northerners are never the enemy of the Yorubas, neither are the Yorubas theirs. But this implication is allegedly painting the gospel in this order. And we must respect the life styles of the northerners even though we don’t value it, as it is their ways of life. We must stop spreading the hatred as though they are our major roadblock to our success in Nigeria. They are not required to live our lifestyles, as we cannot live according to theirs. The best of our successes were accommodated in the north. The best and the biggest churches are in the north. Every headquarters of our industries may be in the north. And one of the largest market in Nigeria is housed in the hearts of the north and they accommodated us all. Amotekun or Atemokun should not destroy all these.

I must recognize the efforts of the Ooni of Ife and other Yoruba traditional Kings, I respected their positions, and the values they have for the oneness of Nigerian. I urge them to further find a way to accommodate the interest of others who are raising suggestion on how best the Amotekun ideas would be accepted by all. These include not disregarding the office of minister of justices and other law gurus advices.

I rest my case.

Post-UTME Cancellation: The law, emotions and whims of discussants