Salat is a means of communicating with Allah. As Muslims, it is expected d that salat is observed five times a day; asides the voluntary salat like nawafil (extra prayer after certain obligatory prayers), tahajjud (predawn/midnight prayer observed best in the third part of the night) and a few other prayers offered to seek Allah’s counsel, to ask Allah for particular needs e.t.c. It is important to note, however, that the compulsory salat which are offered five times a day are to be observed at their appropriate “times.”

There are certain conditions to salat that one would learn alongside the art of observing the salat. Though a lot just pray, without the required practice that should be ascribed to the prayer, it is worthy of note that Salat is a tool for communicating and linking with Allah. In other words, your heart should feel more than your body should bend, kneel and succumb to the act of worship while you are doing it. You shouldn’t feel as blank as you were or same as you felt before embarking on the Salat journey.

As I observed my nawafil this afternoon with Maryam observing hers by my side, I also prepared my mind to observe Salatu Dhuhr with her after our individual rounds of nawafil. We could pray the obligatory salat together as a congregation because there was no male present in the house. She finished her nawafil before me and then instead of sitting to wait for me to finish mine so we could observe dhuhr together, she got up and made another round of prayers.

I knew we should pray together but thought she changed her mind. It was not until I remembered that the voluntary prayers to be made before Salatu Dhuhr could be four rakaat that I figured she wasn’t making the actual salat yet. She was offering two extra rakaat to sum up her nawafil to four. I made two more rounds of nawafil myself and then, there she was on the identical prayer rug we were both using, awaiting my closure for my nawafil so we could pray Salatu Dhuhr together.

Without exchanging words, we stood up to pray together with our feet touching and our heart in the direction of our creator. Together, we encouraged each other in good by observing the voluntary and later the obligatory salat in unity, without much more than “Silent Approvals.” 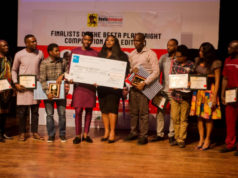