The Muslim Students’ Society of Nigeria, Lagos State Area Unit has described the denial of two hijab-wearing students from writing an exam at Igboye Senior Secondary last Friday morning as a breach of their constitutional rights.

The Amir (President) of MSSNLagos, Miftahudeen Thanni, in a statement explained that human rights, the right to equality are enshrined in section 17(1) of the Nigerian constitution.

He said, “The unruly act that bothers on infringement on the right of human person and dignity of the two female students of Igboye Senior Secondary School in Epe who were sent out of examination hall because of Hijab is totally unacceptable.

“These students are first human beings and Nigerians before being a Muslim and as such do not deserve this harsh and dehumanizing treatment in their own fatherland.

“Without mincing words, Lagos State government is second to none when we talk of provision of equal educational opportunities for all, but it is unfortunate that characters like the teachers and principal of Igboye secondary school who sent the two females out of examination hall due to their religious bigotry and extremism are sabotaging the effort of Lagos State Government and scuttling government’s unrelenting quest to ensure mass literacy in the state and the country in general.

“It is worthy of mentioning that Lagos State is the true image of the Nigerian State and perfect implementor of the 1999 Constitution of the Federal Republic of Nigeria (as amended).

“There is no gainsaying that Lagos State Government has invested in human capital development in the state; is it the Eko Project, Eko Excel we want to mention, free and compulsory education from primary to secondary level, Bursary and scholarships award to mention but few.

“It is our resolve to intimate the general public to be law-abiding and sue for peace as issues like this require no violence and any act of disorder. The act of sending Muslim students out of exam hall is illegality, and of course contempt of Appeal court ruling on hijab case.

“We have resolved to sue the perpetrators for the contempt of court order, breaching the constitutional provision of equal rights to education and relegation of human dignity

“This act of hatred, extremism, victimization, and extrajudicial persecution and punishment must be nippled on the board to forestall religious extremism and intolerance in our dear state.” 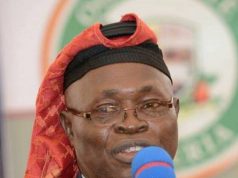